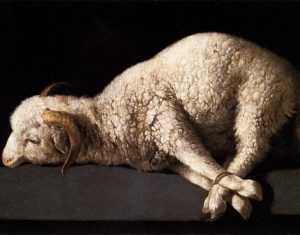 Sacrificing sacrifice. At first it sounds like a contradiction. After all, if a person who, having resolved to give up sweets for Lent, justifies eating a bowl of ice cream by saying that she is offering up the sacrifice of not avoiding desserts, it sounds silly. It sounds like the person is either looking for some kind of loophole, or maybe that whatever they decided to sacrifice in the first place just isn’t a big deal to them.

But could there be situations where having to give up the sacrifice we had anticipated making in fact costs us more interiorly than the original sacrifice would have? I think that for someone who has left the convent, this can frequently be the case.

The Song at the Scaffold, a novella written by German author Gertrud von Le Fort, is a fictionalized story using many historical facts about the Carmelite Martyrs of Compiègne. When, during the course of the French Revolution, the Civil Constitution of the Clergy commanded that all monasteries be suppressed, these brave nuns refused to obey, and ultimately were executed. Certain quotes from this novella give insight into what is really at work when a woman discerns that she is called to leave religious life.

When the French government began its persecution of priests and religious, one of the nuns in this convent, Sister Marie of the Incarnation, was filled with an ardent desire to offer her life to God in martyrdom. In her zeal, she even persuaded the other nuns to have a similar desire. Full of fervor, they made a vow to offer their lives in order to save France. However, as the events of the story unfold, Sister Marie is the only one of the nuns of the monastery who was not put to death. How devastated she must have been! The author of the story tells us:

Now, my friend, comes the real sacrifice of this great soul. We see Sister Marie of the Incarnation approaching it and disappearing into it as through a dark gate, disappearing entirely. This sacrifice has no proud name. No one admired her for it, noted it down, or even observed it. Yet she too sacrificed unto death, effacing the significance of a whole lifetime: she sacrificed sacrifice. (Von Le Fort, Gertrud. The Song at the Scaffold. New York: Sheed & Ward, 1993. Print. Pg. 69, emphasis in the original)

It is certainly no small thing to make the type of consecration that these Sisters made, and it shows Sister Marie’s generosity and nobility of spirit that she desired the grace of martyrdom so fervently. Surely it would have been a great and beautiful thing and given God much glory if Sister Marie had died a martyr’s death. However, God was calling her to make a different sacrifice; one that was even harder for her.

I doubt anyone will disagree that entering religious life, notwithstanding its great beauty, entails a good deal of sacrifice. You give up marriage, having children, being able to see and communicate with your family and friends as much as you might like, the freedom to decide your daily schedule, a career, and many other things. Daily living of religious life also brings with it many crosses, some small and some larger. Going into it, you were aware of this, and yet you embraced this new life with joy because Jesus, the one you love above all, was asking it of you. You pledged yourself completely to Him.

Then the time came, however it happened, that it became clear that it was not God’s will for you to remain in the convent. For many, if not all, it was probably a very hard time: I know it was for me! But know that in asking you to leave the convent, God was not rejecting the offering of yourself that you made to Him. Rather, God was asking of you a different sacrifice: a sacrifice that meant giving up some of the deepest desires of your heart. There was nothing wrong with your desire to give yourself completely to God through religious life: far from it! God still desires your total gift of self, but now in a different way.

Entering religious life is a visible, notable sacrifice, one that frequently draws the admiration of others. Even people who aren’t particularly religious might recognize, to some degree at least, the beauty of religious life. Not so with leaving. To an outside observer, it can perhaps look as though a woman who has left religious life is giving up, or, alternatively, that she is finally “coming to her senses” and getting back her “freedom.” They may not realize that for some, leaving the convent is a huge sacrifice: perhaps even greater than the sacrifices involved in entering in the first place.

The decision to leave the convent can indeed be a sacrifice with “no proud name, one that [n]o one admire[s], note[s] down, or even observe[s]. A sacrifice that no one knows, sees, or understands” save God alone, the loving God who sees what is hidden in the depths of your heart. He is so intimately united with you that not only does He know what you are experiencing, He has experienced it all Himself.

Earlier in The Song at the Scaffold, there is a scene where Mother Teresa, the monastery’s Prioress, is informing the Sisters of the government’s decree forbidding religious to make their vows:

Then she read the decree. You, my daughters, she said to the two novices, because of this cruel law, will offer up your perpetual vows to His Majesty by sacrificing the joy of pronouncing them solemnly. For it is not important to realize our own aims, even though they may be the most worthy, but to fulfill the will of God. Do not therefore rebel against this decree, my dear novices, but neither should you try to repress your sorrow by sheer force of will. Embrace your disappointment and it is justifiable in complete love of God, and you will be obeying the spirit of our order. You will be Carmelites in the full sense of the word at the very time that the world does not permit you to be Carmelites. (pgs. 34-35)

This quote really gets to the heart of the matter. Think about it: Why did you enter the convent in the first place? Wasn’t it because you thought that this was God’s will for you? And why did you leave? Was it not because you realized that God was asking you to do something different? In both cases, you were seeking God’s will. Without question, the desire we had or have for religious life is a good and holy desire. However, what matters ultimately is that we are striving to do God’s will. Thus, so long as we are seeking God’s will, we should be at peace.

Nevertheless, I think Mother Prioress makes a good point in saying that this disappointment we may experience is “justifiable” and that we shouldn’t “try to repress [our] sorrow by sheer force of the will.” I think it’s quite natural and normal to go through a certain grieving when we have to give up such beautiful, long-cherished desires. Yet that sorrow is part of the cross that Jesus is now asking us to bear. Each one of us, by our Baptism, is called to be a “bride of Christ.” Some Christians are called to live out this identity in a particularly striking way by means of religious life, but each one of us, without exception, is called to a spousal union with Christ. The cross is an integral part of this union. So by asking you to leave the convent, Jesus is by no means rejecting you as His spouse. Rather, He is indicating that He wants you to live out this spiritual union in a different way.

And isn’t that what it really means to be a religious, that you are seeking to conform your will entirely to God’s, even when it is difficult? After all, that is why you took the vow of obedience, or were preparing to take it, because you wanted to always be sure that you were doing the will of your Beloved. Truly, to paraphrase Mother Prioress, you will be the bride of Christ in the full sense of the word at the very time that you do not externally appear to be the bride of Christ. This “sacrificed sacrifice,” made with love, is something very beautiful and precious to God. This cross you are carrying is His gift to help you become more and more like Jesus as He prayed to His Father, “Not My will, but Yours be done.”