In July 2015, Aussie former-Dominican Bek Griffin embarked upon a journey across the Pacific to the USA where she visited other former religious sisters from a range of different States and communities and enjoyed some of the very best couch and futon accommodation that the “Land of the Free” and the “Home of the Brave” had to offer. The experience was both vacation and pilgrimage, both restorative and prayerful… and a heckuva lotta fun!! She shares this experience in the hope of inspiring others in post-convent transition to prayerfully consider responding to the unexpected manifestations of God’s love that bring healing and joy.

ex-Con: n. a former resident of a convent; a former member of a religious community.

Called to vAcation: permission to be joyful!

When we enter religious life, we give the Lord our unconditional “yes” to whatever He may ask of us for the entire remainder of our lives. For those of us who leave and return to the world, this doesn’t cease to be the case. Rather, it takes on a radically different appearance to that which we thought it would. My act of returning to the world after a year and a half in community was fundamentally in continuity with that very first “yes” I gave the Lord in May of 2010 when, praying the 10th Station alone in a candle-lit chapel I responded to the totality of the Lord’s gift with my own offering of my life to Him – small in comparison to His infinite gift, but the very best I had to give, and in some way, pleasing to His loving and adorable Heart.

My act of returning home was a step forward in raw trust, a deep conviction that He was calling me out not as a rejection, but as a positive thing with a definite purpose… and so I took my step forward into the dark, and like Peter walking on water towards Jesus, my trust faltered at a certain point. I flailed and stumbled and found myself over my head amidst wild waves that served as a foil to show up my lack of faith.

My first mistake was to forget that I was not alone, to rely upon my own resources. After returning home, I was determined NOT to “sponge” off the charity of others for longer than necessary (a.k.a. I succumbed to pride.) I put a great deal of pressure on myself to find employment and to become equipped to pull my weight financially. While the intention was to take responsibility for myself and to minimise the impact that my unexpected transition had on those I loved, the impact to ME was that I forgot, for a little while, just how much the Lord loves me! Life took on a bleak and burdensome flavour and this made my interior post-convent processing that much harder. I threw myself into work, and in a stunning act of kamikaze madness, undertook also to complete in the space of about 10 months another Masters degree in my “spare time.” Full-time work and full-time study whilst still maintaining one’s responsibility to be present to one’s family means that, even when you DO uncompromisingly schedule prayer time for the Lord, you don’t have a whole lot of energy left to give to Him! He gets time… but not necessarily quality time. I was aware of my thirst for Him… and yet did not allow room in my life to frequently approach the Well from whence Living Water can be drawn. Occasional bursts of mercifully gifted fervour kept a little flame alive… just.

It’s the battle we all face, I suppose, out here in the world. And yet as we stumble in the dark, our Kindly Light is ever there to lead us on, if only we dare to trust and follow. I made a resolution for the new year. I would build back into my life the pattern of daily mental prayer that I lost when I left community life. It HAD to work – it was at His invitation, after all. It would happen by His Grace.

So it was some 18 months after returning to the world that I found myself in my third post-convent job, a little more stable and lucrative than those prior. Prayer was a more fruitful fixture in my life than it had previously been. Further, I belonged to an international community of women who loved the Lord intensely and were each seeking out ways to serve Him and share His Love with others – I had been in communication with a number of other women who had similarly left my former community, as well as a number of active members of Leonie’s Longing for some time. I realised that these were firm and worthwhile friendships – wonderful gifts! Over a period of about six months, the idea of travelling to the United States to visit some of these friends kept coming up in conversation and even in my dreams. I considered my options and my budget and realised that such a trip would be feasible if I saved carefully… could it be possible that the Lord actually actively wanted me to take a vacation?

It can be so easy, falling prey to my pride, to seek fulfilment in achievement. My academic pursuits left me wide open to this. Nevertheless, in moments of uncharacteristic clarity, I find myself wondering why I don’t just get out of my own way and let the Lord fulfil me!!

Somehow on this occasion I did exactly that. I listened to Him. I got out of my own way. I spoke to my friends and found out which of them would be happy to host me for portions of my adventure… and then I booked flights till my hip pocket could barely handle it anymore. Four very dear and generous friends with a whole lotta God-given love in their heart… and all He was asking me to do was let them love me – to let Him love me.

Things fell into place. My application for a month of vacation time at work was approved without incident. My travel preparations were unimpeded. I got on my flight and some 24 hours later I was hugging a dear friend I hadn’t seen in years! She and I had become very close while in community together; she entered about a year before I did, and left about a year before I did, and our time in the community only overlapped by 6 months. Now here we both were – her a teacher, me an IT professional in the education sector – let loose in the world!! As we road-tripped Texas together, I made the comment to her that seeing her in this new context… ordinary life… and just spending time with her and doing regular things… it somehow really affirmed for me on an interior level my decision to return to the world. There are many trials and dangers associated with no longer having the walls of the convent and the horarium and my religious community – but there are many joys and beautiful things to be experienced, too!

The purpose of my visit to Texas was purely and simply to spend quality time with my very dear friend.
Mission accomplished. Definitely. And that was the absolute highlight of my Texas leg of the trip. 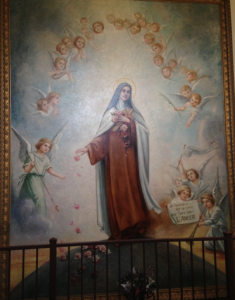 Portrait of St Therese by her sister, Celine

It wasn’t all about staying in and eating icecream and catching up, though. Some of the secondary highlights included: