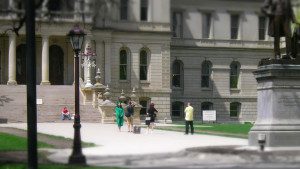 And what do you want to be when you grow up? asked the fourth grade teacher to her class. “An astronaut!” “The president!” “An actress!” “A pro-football player!” responded the bright-eyed students. The sky is the limit to a nine year old. Could you imagine if a child ecstatically exclaimed, “a cashier!” or “a receptionist!” Such a response would certainly raise eye brows, and maybe even a little teasing on the part of his or her classmates.

Yet, the older we get, the more we are faced with obstacles when pursuing our dreams. Suddenly, we wake up to find ourselves sitting in a cubicle, entering senseless data and answering phones for a company that sells pencils. So much for our dreams and ambitions. Time to face reality.

As a teenager, my greatest ambition was to one day become a nun, and at 25 years old, that dream came true. Happily ever after? Not exactly. I was as surprised as my friends and family were when I realized it was not my calling. Leaving the convent was the hardest thing I had to do. I felt like a complete failure. Desperate for a job, I landed a secretary position. It paid the bills, yes. But was I happy? No. That nine year old self challenged me to aim high and fulfill my true potential. Pushing aside my insecurities and doubts, I listened and entered a graduate program to become a certified Counselor.

A vivid memory has always stayed with me that has kept me grounded. Shortly after I left the convent, in a time of confusion as to what I was going to do next, I turned on the television to a local Christian station. The host on the show said something that entirely changed my perspective of vocation. While giving her personal testimony, she had discovered that where your wound is, there your ministry also will be. Many can testify to this truth, including myself.

As a Career Coach, I have had the privilege of helping others find out “who they want to be when they grow up.” More often than not, individuals discover that their career potential is right in front of them. Maybe it’s a personal hobby, an academic interest, or through volunteer work. Your path may not be clearly set out in front of you just yet, but if you remember to listen to that little nine year old voice in your head, you will find yourself fulfilling what Aristotle once said, “Where your talents and the world’s needs cross, there lies your vocation.”

Wendy has received her MA degree in Counseling Psychology from Regis University and her BA in Religious Studies from Benedictine College. She has served her community as a career coach in both the non profit and government sectors.