The Art of Awkward 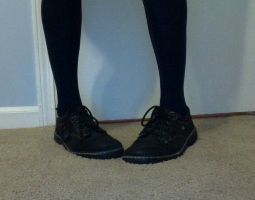 Was it just me, or did returning from the convent leave you feeling like a turtle standing there without a shell?

For me, the only thing more awkward than sitting in the airport on my way home wearing my knee-highs and clunky “nun-shoes,” with no one to talk to and nothing to make me look distracted or less lonely than my breviary and rosary, was facing EVERYONE…because even though people are understanding, nobody understands.

Why am I awkward? Let’s face it, I’ve probably always been a bit different. The fact that my idea of the perfect life was vowing and embracing the evangelical counsels; the exact opposite of that which the world tells us will make us happy, attests to this. Sex, money and power anyone? No thanks, I could really go for a life long commitment of chastity, poverty and obedience… What?

The thing is, the more I became graceful and comfortable living the religious life the more I became clumsy and uncomfortable in the secular world. In some ways I think it just had to do with the fact that I wasn’t used to being exposed to the world anymore. I was used to modesty, silence and prayer, study and recreation, a schedule and a community of women striving for holiness and love. All of a sudden I came crashing into the immodest, noisy, chaotic and selfish world that I had previously escaped. All of a sudden I felt scandalized and uncomfortable by everything around me.

However, now that I’ve been back in the world even longer than I was in the convent and now that I’m well exposed to the world and I don’t feel scandalized and embarrassed at every moment, I think that it’s still important to be awkward. We should be graceful and skillful women of Christ but awkward to sin and the secular world. Lets not get comfortable with that which the world offers but rather keep striving for chastity, poverty and obedience according to our state in life.

Lord, give us the grace to be awkward! Amen