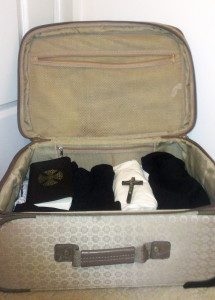 I was once told that leaving during postulancy is the equivalent of ending a relationship after a couple of dates: it was only a trial, a getting-to-know you period, and no commitment had been made on either side. Unfortunately, that’s not what it feels like. When I hear people describing what it was like to pack their bags and move out of an apartment shared with someone they’d eventually hoped to marry, I now feel a strange kind of empathy: that’s what it feels like. (Did you sometimes look around at the other postulants and novices and imagine what you’d all be like together as a group of old nuns one day? Yep, me too.)

If not yet formally committed to the religious life, a postulant is at least invested in it, and it won’t go quietly from the heart or mind afterward. Insignificant things suddenly remind you that you’re not on the path to being a nun anymore. It hits like an actual punch to the ribs, and all you can do is brace yourself and think: Ouch.

A few weeks after I left the convent, I looked around my new bedroom for somewhere to flop down and read, and realised with a shock that I was no longer subject to the custom that forbade sitting on the bed, because I was no longer part of the community which held that custom. Ouch.

At Mass six months afterward, I stood for the Our Father and tucked my hands under the long cotton scarf I was wearing. I had left well before receiving the habit, but suddenly realised what a scapular would feel like draped over my hands, and that I would have been wearing one by then if I had stayed. Right on cue: Ouch.

A couple of months after that, we had the story of the rich young man as the Sunday Gospel. To describe the result, I will need bold text, Caps Lock, and a minimum of three exclamation marks: OUCH!!! The story is far too familiar to need repeating here. Have you ever read a vocations guide that didn’t include it? For balance, I wish there were resources for discerners that included this story:

And the whole crowd of people from the district surrounding the Gerasenes’ country begged Jesus to go away from them, for they were thoroughly frightened. Then He re-embarked on the boat and turned back.

The man who had the evil spirits kept begging to go with Jesus, but He sent him away with the words, :Go back home and tell them all what wonderful things God has done for you.” So the man went away and told the marvellous story of what Jesus had done for him, all over the town.

Why had I never noticed it before? This one lonely everyman, overwhelmed by the love shown him by Jesus, begged to follow Him, and was gently told to go back to his family instead.

When I read that story during Lent, it was like letting out a breath that I’d been holding for the best part of a year. I was not the rich young man who had turned away sorrowfully out of love for the world. I was not the foolish bridesmaid who had brought a lamp but neglected the oil. Most of all, I was not the worker who put my hand to the plough and looked back. I was the one who knelt at His feet and said, “Lord, let me come with You!” and received instead the loving instruction to go home.

Naturally, there are still things that catch me off-guard: During the morning Mass on Easter Sunday, I felt a rush of emotion as the familiar opening notes of Haec Dies flowed through the church. If your Sisters sang it every morning throughout Easter week, as mine did, you could probably chant the first two words in your sleep. Ouch. Forget nostalgia: this felt like hunger.

God’s gift to me is the grace to be able to say now when that happens, “Lord, thank you for this pain – please turn it into something productive.” It took ten months for me to reach this level of acceptance, and I have a long way to go yet, but I’m grateful to be here.

At the age of seventeen, Spiritu watched some elderly nuns laughing together after Mass and decided instantly that this was what she wanted to do with her life. After six years of intense study about the Catholic faith and the religious vocation, she entered a beautiful community in her own country, Australia. Seven months later, she returned to the world, saddened that her discernment hadn’t worked out as she’d hoped. She is now exploring other possible options for the future, and owes an enormous debt of gratitude to her family for their love and help.