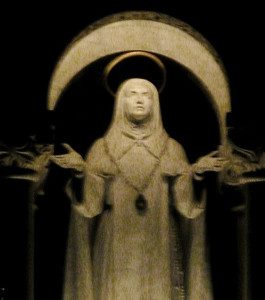 The ID Card Saga and other Former Nun-People Problems

I am reminded of God’s sense of humor every time I pull out my license. Why? Because I got my license renewed two months before I left the convent, and haven’t gotten around to changing it – so as you can imagine every time I board a plane or go to a bar for a Theology on Tap I have to pull out my ID, with a picture of me very clearly in habit. I can only imagine the thoughts of the Airport Security and Bouncer. I’m sure they’re thinking I’m some crazy nun in cognito who jumped the convent walls for the weekend. Keep going sister, hop on that plane to Orlando! I won’t tell anyone! I once walked into a liquor store to buy champagne for a cupcake recipe, and a second later walked right back out because I couldn’t bear to show my license. I could only imagine! Here sister, I’ll put it in a brown paper bag so no one will know! Ginger ale would have to do! Now I can laugh about it.

These experiences also remind me that although I’ve left Religious Life, despite the shame and confusion that often comes with it, the Lord is not disappointed that I am no longer a Sister. I am the same in His Eyes even when I’m wearing basketball shorts and a t-shirt and am called by my given name.

I think many of us go through this crisis when we leave Religious Life and Seminary. We live a particular life with a particular order, and our identity can become wrapped up and intertwined (like DNA chromosomal strands) with the identity of the community. Then when we leave we feel like nothing. I remember thinking, “Who am I if I’m not a sister?” But I think we’ve had it all wrong from the beginning. At least for me, I was never confident in my identity. In this “create-yourself” culture, I thought- from as far back as I can remember- that I had to find it. Everyone seemed to have some defining characteristic, relationship, talent, etc. that seemed to define them. And I didn’t feel perfect at much of anything.

Being an identical twin also makes things complicated, especially when people ask, “Who’s the smart once and who’s the athletic one?” and other questions of that sort. She seemed to be better at most things, and some people thought I was her because they didn’t know I existed. The more I tried to be good at something, or find what could justify my being, the more restless, empty, and alone I felt.

In college, it was a whole new world, where I found wonderful Catholic friends who loved me for me! It was hard to be convinced, but the healing began! I could trust people a little, and for once I saw people look into my eyes and see God’s Presence in my soul. I couldn’t describe it as such then but I knew that they recognized my worth more than I did. The Lord led me to Himself slowly and beautifully and I discerned Religious Life, entering after I graduated college. 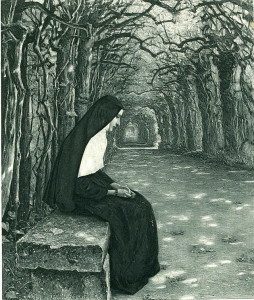 I was excited for everything about becoming a Sister. I thought I could leave everything behind including the old me, and start fresh. But history was repeating itself. I had done this before. In sixth grade I moved to a new school, and decided to change myself. I didn’t like who I was and how I looked, so I grew out my bangs, got contacts instead of glasses, bought a few new outfits (since my old wardrobe was almost entirely Land’s End – my mom’s favorite). This is when I started developing an eating disorder. It was just in my thoughts at first- I wanted to be different since I felt so invisible. It got worse in high school and my family was worried. My soul was crying out for help but was afraid to receive it, so I managed it, and was “okay” all through high school and college. It was an exhausting, never-ending search for self-acceptance and perfection. Even after all those years at “failing” to be perfect I thought I had finally found the one path that would make me perfect.

I managed pretty well the first year of Postulancy as I had for so many years. When I entered Novitiate I was so excited because I was genuinely excited, but also because I thought I was a new person. The habit covered a lot of my body but it didn’t hide my past. My new name didn’t take away the hatred I had towards my old self, since – shockingly – it was the same self! Shortly after entering Novitiate, my eating disorder got progressively worse and my Novice Director noticed the darkness I’d held inside me for over 10 years. I was terrified, but consoled to finally be able to let this disorder not control me and my life. I went through Counseling for a while but it became clear that I needed more intensive treatment. And so after two and a half wonderful, beautiful, and blessed years, I departed with two outfits and my nun shoes, feeling sorrow but great peace and clarity that it was God’s Will.

I knew when I left that, even in a community dedicated to proclaiming the dignity of life, I could tell anyone else they were a beautiful, unrepeatable gift of God, but I could not believe it for myself. I knew that God was going to help me know that I was beautiful and loved.

Misericordia works for her home diocese, is a caffeine addict, and loves swimming.