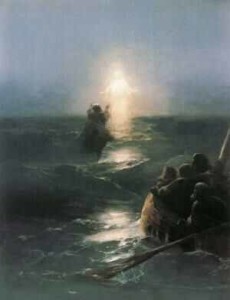 Through Storms to His Heart.

I have been out of religious life for almost four years and was in religious life for almost three years, with it being discerned by the council at my religious community that I had been called there but that I was not called to make first vows.  Through inner storms and pain, consolations from God and friendships after leaving, I have been making my way to becoming more secure in God’s love for me in the midst of trials and learning to walk on water into a deeper relationship and intimacy with God.  One particular storm came to mind recently after talking with someone who had been in a religious community for ten years before being called back into the world. We spoke a bit about the experience of leaving religious life and I shared with her a portion of something I had typed up several months ago after experiencing an inner storm after watching the profession of first vows at a Mass.  It consisted of analogies of what it felt like to leave a religious community and I also included a couple of things that I had heard from other women.

This was the description:

It’s like living with your boyfriend before marriage and having given him everything and then shortly before your wedding day, he calls it off & breaks up with you.

It’s like losing many members of your family all at once, having them die suddenly & without being able to say goodbye to many of them.

It’s like a vet having traveled to a foreign land who was planning to give his life for his country but instead finds himself missing a limb and then returns home to discover that everything has changed & life has gone on around him as if he had died.

It’s like being invited to live in a house closer to the gates of Heaven and then being pushed out a window & landing in a pile of manure.

It’s like being stripped of your clothes (habit) and feeling initially as if you are walking around naked with people staring at you.

It’s like being in your mother’s womb where it’s quiet and then suddenly finding yourself in the middle of a busy intersection with cars honking loudly at you (and yes, maybe even while you are still naked!).

It felt really strange being back in the world and leaving a religious community was an experience that so few understood or that even good intentioned people would at times make jokes about, such as stating that I had been “kicked out of the convent”.  It was and still can be a real cross and a sensitive area in my heart.  Yet, this heart is so loved by God and it is in this cross and opening my heart more to God and His healing and unconditional, personal, merciful love for me that this suffering is actually an opportunity for me to receive grace, to go deeper into God’s thirst for me, and to grow in compassion for those who suffer and forgiveness of those whom I have felt hurt by both in and out of the convent.  When storms arise, it is an opportunity to grow in trust and reach out my hand to Jesus like St. Peter and have Jesus help me to walk on water to Him.

A priest I met after leaving religious life gave me advice that I still try to follow: do a half an hour meditation every day; it is a good antidote against sin.  I may not be in religious life any more, but I am still His (we all are) and He desires communion with me in prayer.  It won’t look the same as in religious life, but I have been blessed to be able to still attend daily Mass, frequent the Sacrament of Reconciliation, and have a Perpetual Eucharistic Adoration Chapel in walking distance of my apartment.  Prayer is crucial and I would not have progressed as much as I have in my healing process without it.  I am also weak and know that my heart needs to be reminded daily of the truth of His love for me. Through prayer, we give God the Father the opportunity to tell us as He told Jesus “this is my beloved (daughter) with whom I am well pleased” or to speak to our hearts the words He spoke in Isaiah “you are precious in my eyes, and honored, and I love you”, or to be hit with the thought “You died for me so that I could be married to You”.  Jesus consoled me after having that very thought pop into my head one night.  With Christ’s death on the cross, He made the Church and each of us His spouse…I am His bride!  He did not “break” His engagement to me!

While writing this very blog post, I began to also reflect on this – what if I were not here?  What if I were not back out in the world now? How different my life and the lives of others would be if I did not exist in it and how many opportunities I would have missed out on if I were still in religious life.  Since being out, I have been asked to be a bridesmaid in four weddings including of two friends I did not have pre-convent, became a godmother, was present to a sibling during a difficult time in his life (my younger brother was diagnosed with a form of leukemia a few months after I had left the convent but he is now in full remission, thanks be to God!), started and lead a group for women at my parish to grow in the spiritual life, am sponsoring a young woman in RCIA, have spent countless quiet hours before Jesus in prayer giving Him the opportunity to better love me without having the responsibilities and stress I had felt at times in religious life (and before being in a possible vocation of marriage), and am planning to go on a pilgrimage to the Holy Land in a couple of months. 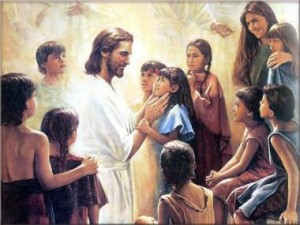 There have been and will be ups and downs, but if we continue walking to Him and with Him on the water turning to Him and His Heart of love in prayer and seek to see the blessings, our cross can become a source of grace for ourselves and others. Regardless of our vocation, our hearts are made for God & union with Him and to live with Him for all eternity in Heaven. He is the #1 source of love in our lives and only His love is perfect and is to complete us.  How great is His love for us!  Receive His love!

“Suffering has to come because if you look at the cross, He has got His head bending down – He wants to kiss you – and He has both hands open wide – He wants to embrace you.  He has His heart opened wide to receive you.  Then when you feel miserable inside, look at the cross and you will know what is happening.  Suffering, pain, sorrow, feelings of loneliness, are nothing but the kiss of Jesus, a sign that you have come so close that He can kiss you…” – Mother Teresa

“Lay all your cares about the future trustingly in God’s hands, and let yourself be guided by the Lord just like a little child.” – St. Teresa Benedicta