Fourteenth Station: Jesus is Laid in the Tomb 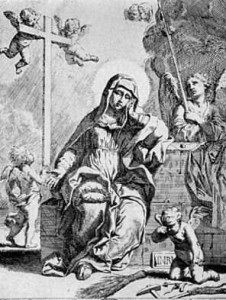 We adore You, O Christ, and we bless You. Because by Your Holy Cross You have redeemed the world.

Were Mary’s tears silent ones?

In the privacy of the space John made for her in his home, did the Blessed Mother ever get the opportunity to just let go and give voice to her grief? Perhaps, as she wept, she was struck by the fact that her sobs were the only sound she could hear… the surrounding silence that would have answered her own sounds of grief would surely have given rise to great sorrow.

Her Son lay dead in a tomb.

With the exception of those three days of anxiety searching for Him as a child in Jerusalem, she had never before experienced such a forced and terrifying separation from Him. That moment when they took His broken body from her loving arms and she watched them wrap Him in linen and place Him in the tomb, rolling a stone across the entrance way… it would have been a strange kind of closure which would have seemed to come too soon, too suddenly, even after the events that lead to His death. He really was dead. His burial, though rushed to accommodate the Jewish sabbath, was real… but what now?

The experience of that day Our Lord Jesus died would have been terrifying, 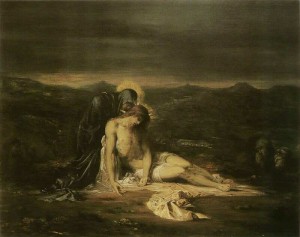 dramatic, emotions would have been racing… but now that He lay dead in a tomb? Sudden silence. Eerie confusion, seasoned by the greatest depths of sorrow. Seeming nothingness.

The Sorrowful Mother knows silence and separation from her beloved Son only too well. During those times that I experience frustration in prayer due to a sense of separation from Him… when it seems He is absent, when the only language with which He communicates is silence, but it feels more like nothingness… I need not be alone. In turning to the Sorrowful Mother I have a companion who understands the distress of this experience, and yet she has hope in the belief that the Dawn of Compassion WILL break upon us.

And so she waits with me…