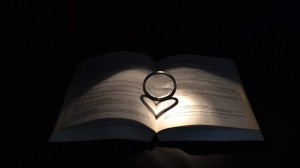 As I mentioned above, marrying Jesus is a lot different than marrying a human being. For one thing, Jesus can’t die and leave me. He already did that. I just heard about a friend’s friend who died at age 34 leaving a wife, three kids, and a baby on the way. He was a strong Catholic and has made a huge ripple with the witness of his holy death. This is devastating, and frightening too, but somehow there’s a depth of hope and love in it that I can’t even fathom. When I see this, love looks worth it. And I know for a fact that most mature religious have experienced the feeling that Jesus has died and abandoned them, perhaps through the dark night of the soul. They go on living trusting that He is there, but not feeling his presence. There are many similarities in this.

But whoa, before all of that, there’s dating. This should be the fun and anxiety-free part. Rather, for so many of us it is ridden with anxious expectations. The idea of going back into dating frightened me even before I left the convent. I remember a priest who formed us saying, “I wouldn’t want to be out in the dating world these days, you should all consider yourselves blessed!” It’s a rough trail to tread out here, certainly.

Some people leave the convent thinking, “absolutely, I’m called to marriage, let the dating begin!” This wasn’t the case for me. I had no idea where God was calling me upon leaving, so it’s taken me about this long to get used to the fact that God might be calling me to marriage, which implies dating first. Part of this has been finding potential mates in friends or the guys in the circles I frequent. Most recently, during a holy hour, I really felt the Lord ask me to surrender to the fact that he might want me to get married. It was freeing, but also terrifying. Perhaps part of the difficulty, as a woman who was in the convent, is that this looks a little bit intimidating. A guy hears this and wonders if he could “keep up” with me spiritually (obviously he has no idea how far from the truth this is…). I wonder sometimes, when I casually mention this to a guy, if anything romantic is automatically shelved. They may think it’s neat and ask all kinds of questions about it, or if they aren’t particularly strong in their faith, they may think it’s the craziest thing they’ve ever heard. It might also intimidate them that there are priests in my phone’s contact list who I consider to be fathers and brothers to me. One of those priests told me last year (in jest!) that I should just stand outside the seminary and wait for the guys who are leaving. I do sometimes think I’d be most compatible with a former seminarian, because he could likely understand me and my experience better, and I could be relatively sure that he shared my spiritual values and goals (unless he left because he had become cynical rather than simply disillusioned…).

This is where I tend to over-spiritualize things, and where I’m trying to focus on the whole person: attractiveness of both body AND soul rather than just one aspect of them. There is no such thing as a knight in shining armor. Relationships are a two-way street, and no one is going to be in the exact place you want them to be right when you meet them. We also need to love guys for being men: not being “our way out”. Jesus is our way out. I recently saw a bumper sticker that read, “I already have a Savior. I’m looking for a president”. I think we could say the same in this case: “I already have a Savior. I’m looking for a husband.” We need to let men be human, so that we can take the pressure off of ourselves too. Dating is not such a big deal. If a guy asks me on a first date I will not turn him down, no matter how much I think marriage with him is out of the question. Marriage and dating are not the same thing. Friendships are risked when they become dating relationships, but I have to remind myself that it is worth it!

The reason I think God called me away from the convent is obviously complex, but I think it had something to do with the fact that I got caught up in the vocation culture. It’s exciting to believe and to know that Jesus has a plan and 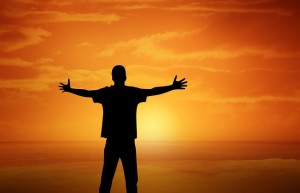 a call for my life. I still believe that. And yet I think in all my discernment process I got away from the idea that Jesus is calling me first to be a Christian. Through my baptism he wants me just for himself no matter what my vocation is. And he wants to work out my salvation not completely reliant on that particular vocation. Since I left the sisters, I’ve come to understand that there isn’t necessarily one vocation that each person is destined to. Before you call me a heretic, let me explain. Is it in the nature of God that he would set up one particular mission for each of us, so that if we failed to discover that mission, we would not be able to spend eternity with him? This sounds more like fate to me. Certainly we each have a mission from him, but I don’t know that it is always definable. After I left the sisters, my former superior sent me that great quote from John Henry Newman: “God has created me to do Him some definite service. He has committed some work to me which He has not committed to another. I have my mission. I may never know it in this life, but I shall be told it in the next.” I’ve looked at myself as a disappointment to Jesus for much too long, as if I have broken his heart by “breaking up with him”, rather than loving him exactly where I find myself. Obviously he desires commitment from me, in whatever vocation that will be. But right now, in the present moment this is what he desires; my complete trust and total surrender to the fact that I’m living my vocation and my mission now. I have to know first that I am loved. And the love of God comes through the love of others; the people around me, my friends, my family, the people I work with, and the people I serve. And even through the men that I might date.

So to all the “Joe Schmoes” out there – thanks for your Schmoe-ness! It’s what makes you real and good and accessible and loveable. I am glad you are human, because I am too! And so, if it’s God’s holy will, I am open to loving you, with a human and imperfect love, so that together we can help each other on this journey towards Heaven.

Did you miss part 1? Read it here.