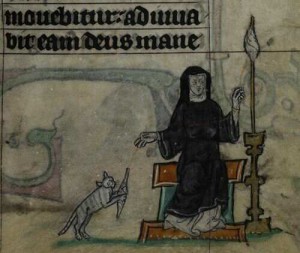 There was a custom in the community for the nuns, on their way to breakfast after Prime, to stop at the statue of Our Lady with the Holy Child in the long cloister, to say three Hail Mary’s there. Wimple the cat was impatient for her breakfast and she would walk among the kneeling figures, giving them small pushings with her head; one hand after another would come out, not to push her away but to stroke her. Wimple was perverse; she would come into the refectory through the ever-opening service door and walk through the room to the other, demanding to be let out. Unlike Grock’s, Wimple’s miaow was piercing and could, at dinner and supper, interrupt the reader so that Sister Xaviera who doted on Wimple would get up and let her out. In a moment or two, the little cat would walk back in at the service door again. (From In This House of Brede, by Rumer Godden.)

On our Facebook page recently, we asked readers about their experiences with pets and other animals in religious life, and this is what they said: 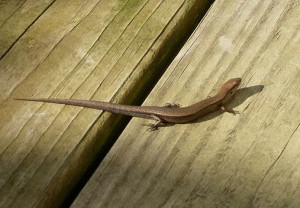 that would sun themselves on the window frames outside the chapel every morning. During the first week of Lent, I got busted: the Prioress gave us a sheet of paper on which to keep a diary of our meditation topics, and I had to ‘fess up and ask her, “Is there enough space to write, ‘Started meditating on Soul of My Saviour, and ended up watching lizards climbing the wall outside”? (At least I tried to keep in mind Saint Teresa of Avila’s image of the soul as a little lizard basking in the light of God. That’s kind of on topic, right?)

I recently read a charming article from The Ark (A Publication of Catholic Concern for Animals) about the pets kept in monasteries of nuns during the Middle Ages.

The Ancren Riwle, or Nun’s Rule, was the English rule for nuns written in about 1300. At first it was a rule for hermits but was soon revised to apply to all nuns. It is quite a strict and rigid rule but in part 8, “On Domestic Matters” we read: “You shall not possess any beast, my dear sisters, except only a cat.” 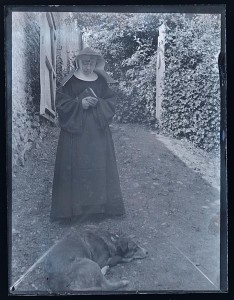 Cue all sorts of trouble as the nuns smuggled rabbits, dogs and birds into the monastery and even into the choir – like Chaucer’s Prioress, who kept a number of “smale hounds” which she fed with “rosted flesh, or milk and wastel bread.” Apparently, bishops conducting visitations would eject these non-regulation critters from the monastery, and then depart, after which the nuns – of course – whistled their pets in again. (What the bishops would have made of the free-range turtles that wander the grounds at the Dominican House of Studies in Washington is anyone’s guess.)

As the monks of the New Skete (Orthodox) explain with beautiful simplicity, “For many of us, love for creation deepens through the relationships we form with our pets, particularly our dogs. By their very nature and need, dogs draw us out of ourselves: they root us in nature, making us more conscious of the mystery of God inherent in all things. We cannot but delight in recognizing God’s mystery in the length and breadth of our daily life.”

Today, let’s give thanks for the creatures that added laughter and companionship to our time in the convent! 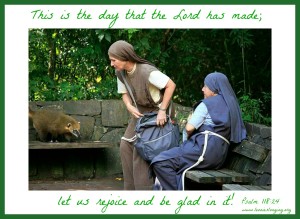