A Guest Post for the Feast of Saint Dominic 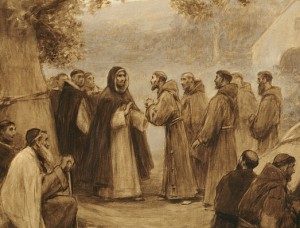 There is an ancient tradition that Saint Francis and Saint Dominic, the fathers of the mendicant reform of religious life in the 13th century, met while at Cardinal Ugolino’s while awaiting approval for their respective Rules. There’s a lot of the history to be legitimately doubted: that we swapped belts, for instance, or changed Constitutions. Whatever did or didn’t happen in the Cardinal’s garden that day, however, a longstanding tradition was born. On the Feast of St. Dominic a Franciscan is invited to preach at the Dominican priory; likewise, on the Feast of Saint Francis, a Dominican is invited to the Franciscans. I am not a Franciscan, but in honor of the tradition I want to begin with cinematic anecdote of Holy Father Francis.

Brother Sun, Sister Moon has its critics, and rightly so. It’s a pretty pastel version of a very peculiar saint whose life more closely resembled an action adventure than a holy card. But even a campy movie can get some things right. Oddly enough, one of the things that Brother Sun, Sister Moon manages very well is vocation: why people come, why some leave, and why others stay.

My favorite scene opens up on the friars begging in the streets. Some people offer them food, others throw garbage their way, but most simply jeer and shout. Francis predictably breaks out in a spont 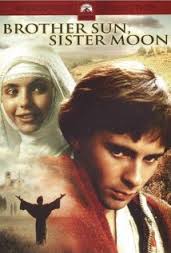 aneous sermon which he closes with a song; a kind of litany to the joys of Lady Poverty and Sister Want. One of the brothers, however, hangs back. We find him peering in the window of a house at one of Assisi’s local lovelies, her blouse having come open as she kneads a loaf of bread. It’s unclear whether the brother is taken with this portrait of domesticity, or just the expanse of cleavage open to his view, but in any case he’s caught by one of the other brothers and brought to Francis, who gives a rather profound if not very technical exhortation on vocation. “We’re not all meant to be monks,” he tells the wayward friar. “If celibacy tempts you more than marriage, then leave, marry, and be happy for it!” Francis ruffles the brother’s hair and the one departing realizes a moment of prophesy: Francis had never tonsured him alongside the others. The scene closes with the friars taking up their joyful song again, this time to joys of Sister Chastity.

As silly as it sounds, there’s deep insight in this scene. Besides the obvious fact that not everyone is called to religious life, Francis’ exhortation is dead-on. If the observances of the life make it harder for you to be a good Christian, then you really ought to leave, and be happy for having figured it out. This is true whether the observances in question are fundamental to religious life as a whole, like poverty, chastity, or obedience, or if they’re more particular to the community in question, like whether they let you wax or bleach your mustache, or whether you occasionally can have a beer or an ice cream.

What I think is even more profound in the movie’s portrayal of vocation here, is more implicit than explicit. If one is bound to leave because the structures of the life militate against your own growth in virtue and holiness, then why would one ever enter to begin with? Here the film is precisely right: because it’s meant to make the Christian life easier. Religious life lived aright is nothing other than the Christian call to holiness, organized and institutionalized to serve the needs of particular people in a particular place and at a particular time. 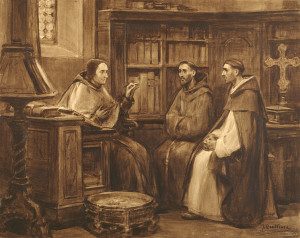 I didn’t really understand this until long after I’d entered religious life. I started in a class of nine, of which I am now the sole survivor. Each time another brother would leave, we who remained would be faced with a two-headed monster. Why is he being called to leave? And more importantly (at least for me), why am I being called to stay? But as life has gone on and my classmates have discovered other vocations: to diocesan priesthood, to marriage and family life, to other religious communities, and to service as single men in the Church, they’ve all reported that the transition out of the life was not so different than the transition into it.

We were all drawn to Dominican life, under some description, because of what the Order these days calls the Four Pillars: prayer, common life, study, and ministry. But of course, long before we entered we were all men of prayer; if not the Divine Office, at least regular daily prayer, the rosary, Adoration, and obviously Mass. We all were part of various intentional communities, whether among our own families, or close-knit groups of friends, various confraternities, or the KCs, or even the Boy Scouts. We were all men of study, especially concerning the Faith, otherwise we wouldn’t have been drawn to the Dominicans to start. And we were all men of action, who at the very least volunteered, if not actually worked, in some ministry or apostolate. And as my brothers have moved on with their lives they have remained men of prayer, of study, of common life, and of ministry. And we in the Order would expect nothing less.

Saint Dominic, whose feast we celebrate, would have a special care for the women of Leonie’s Longing. First of all, he was a failed vocation, at least in the sense that he started as a priest in one place under one bishop and felt dissatisfied. The life of a canon regular ceased be an aid to his salvation and became a liability. And since there was yet no way of life in the Church designed for the work which did give him life, he had to invent it. And together, wittingly or not, Saint Dominic and Saint Francis changed the way the Church thinks about religious life altogether. 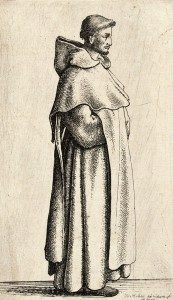 at Leonie’s Longing, is the principle of dispensation. This doesn’t mean that Saint Dominic let the brethren get away with murder; far from it, he was kind of a hard-ass, but he deliberately crafted our Rule and Constitutions such that they would not bind under pain of sin. Why? First, because he wanted all of the brothers and sisters of the Order, both superiors and subjects, to keep the end in mind all of the time. He didn’t want me, as a priest, to have to scroup over Confessions going past time and me missing Vespers, though he would expect me to make it up later. Why? Because the reason for Vespers is for the sake of the penitent in the confessional! But there was a deeper, more profound meaning to Saint Dominic’s take on the law. He wanted the observances and discipline of the life to be undertaken freely, so that they could best dispose the spirit of the individual to the graces necessary, not only for their own salvation, but for the salvation of all souls.

Dominic spent ten years in southern France trying to get the Order started, with nothing but a handful of nuns and his own brother for company. How often during that decade of waiting do you think he thought himself a failure? If he was anything like me, it’d be six times before breakfast. And yet God turned that work into a tradition now 800 years old! You might feel like a failure today, and maybe your transition out of the life was due to something you did, or something they did, or more likely, a bunch of things both of you did. What matters now is how God is going to turn this seeming failure into a success, how He longs to make a saint out of the sinner you see in the mirror. 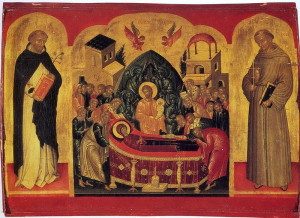 So when you’re tempted to dream about what once was, or to return internally to long-dashed hopes, or to groan in frustration because the baby’s cry won’t let you whisper Compline to yourself, think on Dominic and Francis. And think not so much on the life they lived as on the motivations, the desires, and the intentionality with which they lived it. Don’t dwell on why you left, but give thanks for why you came. And be happy, as Francis exhorts the brother with the unshorn head, that you’ve learned something new about the God who loves you, and about how He longs to bring you home.

Father Dominic McManus is currently Adjunct Instructor of Liturgical and Sacramental Theology at Aquinas Institute of Theology in Missouri. His major areas of interest are liturgical theology, especially cross-ritual studies, and preaching, and he recently published the book, The Mission of LOVE – A Sacramental Journey to Marital Success.
(Visited 2 times, 1 visits today)