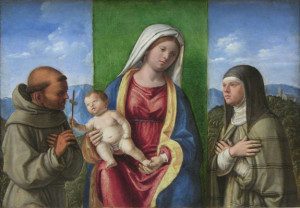 Last week, a Catholic friend was telling me about her parish priest. “He’s a very holy man,” she said, and added, “He’s really on the same wavelength as Pope Francis.”

To which I immediately replied, “I don’t think anyone’s on Pope Francis’ wavelength: I think he’s found one all his own.”

She thought for a second, then nodded agreement.

Pope Francis has a unique ability, wherever he goes, to make everyone – atheists and evangelicals, liberals and conservatives, traditional and fallen-away Catholics – sit back, tilt their heads to the side, and ask in unison, “What actually just happened?” It strikes me that this is probably not unlike the effect that a certain friar, not coincidentally also named Francis, would have stirred up around Umbria in the early 1200s. This rich merchant’s son began his religious life by stripping naked and abandoning all his worldly clothes in a heap in the town square, racing off to rebuild a crumbling church, and gaily inviting the whole world to come and join him. And thus comes a familiar chorus across the centuries:Â What on earth is Francis going to do next? 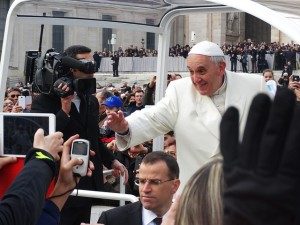 At first, it can seem paradoxical that deep, sincere humility and alarmingly unprecedented actions undertaken on one’s own authority can co-existÂ within the same person. At eight hundred years’ remove, however, we can see clearly that the humility of Saint Francis, the little poor man of Assisi, was the source of his openness to the Holy Spirit; he could hear the tiniest breath of grace and hare off after it without hesitation while everyone else tagged along behind him scratching their heads. Of course, mistakes can be made with this approach (Father Benedict Groeschel comments that St Francis’ greatest error was to allow indiscriminate entry to anyone who wanted to join his Order, with the result that by the time he died there were many in it who didn’t share his vision and oughtn’t to have been there) and confusion can be sown by off-the-cuff remarks (“Who am I to judge?”), but great good also comes from that openness.

Soon, we’ll leave the Year of Consecrated Life and enter the Year of Mercy – a year of reaching out to other Christians, ex-Christians, and non-Christians alike, to share with them the joy of the Gospel of Christ. Saint Francis, one of the greatest missionaries of true, unadulterated joy that the Church has ever known, would approve.

Saint Francis of Assisi, pray for us!