Pierced But Not Broken 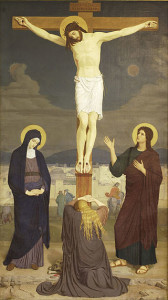 In my former community, we would comment–in a somewhat light-hearted way–about the age of thirty-three being the “year of crucifixion.” Perhaps those community sisters of mine who had already passed that age spoke with more truth than I realized. While there are certain moments of more intense suffering and offering at different stages of life, independent of age, the “year of crucifixion” didn’t pass by without reminding me very clearly of the cross.

At thirty-one, I said goodbye to my community family and embarked upon a new way of life. At thirty-two I met a knight in shining armor and seriously opened myself to the possibility of marriage. And not more than a day after my thirty-third birthday, my knight and I–after a long conversation and many tears–decided that we needed to step back from the relationship. God had not given me the peace I needed to move forward in that vocation.

In some ways it was more painful to end an eight-month relationship than it has been to leave my community of many years. Or perhaps the one was now compounding the other. I was working through not one loss but two. In spite of feeling peace in the rightness of the decision, the sadness continued for many months.

Providence would have it that I had already intended to renew my Marian Consecration on the feast of the Exaltation of the Cross. The 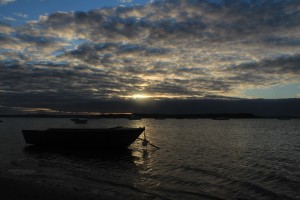 Consecration day itself had its share of crosses, not the least of which was my inability to attend Mass due to my “worldly duties.” Yet on the following day–the feast of Our Lady of Sorrows–I had a moment of heart-to-heart prayer with My Mother. The previous few months had been painful. I needed to be with her at the cross. I wrote this reflection:

“With Mary I stand at the foot of the cross. No…I don’t stand. I fall. It’s hard, so hard. It’s painful. Why? Because of love. Love can hurt. I may have to leave at the altar of the cross something that I love dearly. Why? Because the love of Christ is more, and if He is asking the sacrifice, I can’t refuse it.

But I really have nothing on Mary when it comes to pain, suffering, and loss. Talk about a broken heart! No…her heart was pierced but not broken. She knew suffering like no other yet was not driven to despair. She hoped against all hope. She offered, she loved. And it is with her that I walk through this valley of tears. I’ve renewed my consecration to her – and if I take this act seriously, how much more does she? She is my faithful companion. I know that she does not abandon her children.” 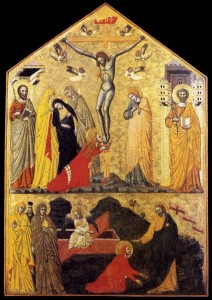 The tears didn’t magically disappear that day, my heart wasn’t healed in an instant,nor did the twists and turns suddenly make sense. But I had a new awareness of Mary’s presence in my life. If Mary could maintain faith and hope in the midst of unimaginable suffering, can she not help me to do the same in my sufferings, small by comparison? She accompanies me at the foot of the Cross, consoles me and reminds me that I have reason to hope. Because if thirty-three is the year of crucifixion, it is also the year of resurrection. We all have that to look forward to, my friends – in small ways in this life and a glorious way in the next.