It was about four years ago now. I was on a discernment retreat and I heard Jesus speak to my heart that he was not calling me to be a religious sister. He was calling me to marriage.

I told Him about the beauty of religious life, how these women give everything to Him, their parents and siblings, their desires for children and for a spouse, their sexuality, and their hearts, to receive so much in return. I spoke to Him about how their hearts are so directed toward Him that at the hour of their death, they will not be staring into the unknown, but into the future they have with their Maker and their Husband.

He spoke to me of the great sacrifice He required of me, one that the religious life could not pull out of me in the same way that an imperfect man could. A sacrifice that would challenge me in a unique way, and squeeze love out of me, requiring me to respond with a love that is not my own. He spoke to me of a love that would pour over me every day, begging me to pour it out onto others. He heard what I spoke to Him, and yet still said, “But I will show you a still more excellent way.”

I was heartbroken, but I believed Him.

Three years after that, I lived the reality that I was not married, engaged, or dating. I was (and still am), “single as a pringle,” as one of my friends likes to say. As I tried to adjust the reality that I was not called to the religious life, but serendipitously, both of my sisters were, to two different communities, which were both different than the one I was discerning with. I felt far away from God in a way and I was tempted to wonder if I did enter the convent, how holy would I have been? Would I have been like Saint Therese in her little way, or like St. Teresa of Avila, in her big way? In response though, I was sobered by the Holy-Spirit-inspired question: is hypothetical holiness more important than obedient faith? Of course not; “Rather, blessed are those who hear the word of God and observe it.” 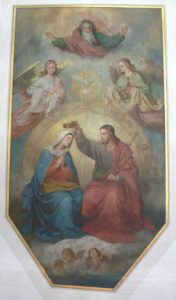 Almost exactly three years from that discernment retreat, I went on a day retreat, one based on Theology of the Body, and the keynote speaker was Dr. Janet Smith. Her words were maybe new, maybe repeated, but this time they stuck. She said that, “Marriage does not eradicate man’s loneliness, but only alleviates it.” Wow. She said that, “every human relationship, especially marriage is a sign, a symbol, of our real relationship with God.” Wow. She said that, “In images of the Coronation, Mary is the woman being crowned, but Mary is a type of the church, and thus a type of each one of us. In the image of the Coronation, imagine yourself being crowned by God the Father, God the Son, and God the Holy Spirit.” Wow. She said that “the Church is the bride of Christ, and thus each one of us is a bride of Christ.” Wow. She encouraged us to spend time in prayer imagining God the Father crowning us as His daughter, Jesus crowning us as His bride, and the Holy Spirit crowning us as His spouse. Wow.

In that moment, I realized that since the weekend I heard Jesus direct my steps away from the convent, I thought: He doesn’t want me to be His bride. He doesn’t want me. I regarded myself as unlovable and undesired. But, of course, that was (and is, and is to come) far from the truth. The expression of the spousal call may be different from the way it would be for a sister in vows, but as Dr. Smith said, I AM A BRIDE OF CHRIST simply because I am part of his Church. He is the one who makes me His bride. It is not a religious community that makes me Jesus’ bride. It is Jesus who makes me His bride. He has chosen me, and chooses me daily to be His bride. He reaffirms His love for me every day, an innumerable number of times, in a myriad of locations in the world, in the Holy Sacrifice of the Mass. There, on the cross, my bridegroom offers Himself to me. I am loved. I am lovable. I am his bride.

I do not now have a husband, fiance, nor a boyfriend (See pringle comment above). I have not found the secret to thinking something was so right for you and living the reality that you are called elsewhere. And I do not know my future. I do know that I am imperfect, I am sometimes emotionally constipated, I say the wrong things, and embody awkwardness in all of its delights. But I also know that I am lovable and loved. I know that God looks upon me and loves me. I learned from the religious community of one of my sisters that, “God sees you like no other person sees you. God loves you like no other person loves you. God does not look at you in your limits, in your failings. He looks at what is limitless in you. He looks at you in what is most profound in you.”

I have moments (days, weeks, months, etc.) when I doubt my future. When I give in to fear that what God promised

“Hope, O my soul, hope. You know neither the day nor the hour. Watch carefully, for everything passes quickly, even though your impatience makes doubtful what is certain, and turns a very short time into a long one. Dream that the more you struggle, the more you prove the love that you bear your God, and the more you will rejoice one day with your Beloved, in a happiness and rapture that can never end.”