Scripture with the Desert Fathers (Part 1)

When I left the convent, I almost stopped praying altogether because it hurt too much. Every time I walked into a chapel I burst into tears: that had been the center of convent life, and that’s where everything that was really important happened, and I was so angry with the Lord that He hadn’t helped me stay, and so hurt, and so disappointed – and at the same time, I was completely terrified that I had walked away from Him, that I’d disappointed Him, that I’d left just because it got hard. If it hadn’t been for a priest at my parish who reached out to me (who’s now my spiritual director), I might have just stopped praying and eventually lost my faith. Recently, as we were discussing the phenomenal growth that I’ve experienced in my relationship with the Lord in the year and a half since I left the convent, Father, too, acknowledged how precarious my faith was at the beginning.

The first time I met with him, only about 5 days after coming home, the first question he asked me was “Are you praying?” He was the only person I talked to after leaving who knew to ask me that question, and who knew that the answer might be “no”. He himself had once been in a similar position, having discerned out of seminary (he re-entered later), so I suppose he had the insight that personal experience brings. When I told him that, indeed, I was not praying, he rather sternly told me that I needed to be praying a holy hour every day, especially because I wasn’t doing anything else at the time – I didn’t have a job yet so I was just home by myself all day. It took me a long time to really get into the habit of doing that – every confession for at least a month and a half included “not praying” – but eventually, with his encouragement, it started happening regularly.

At the beginning, I felt like I had to re-learn how to pray – I no longer trusted myself to recognize the Lord’s voice, 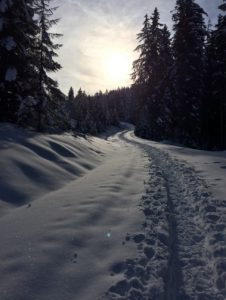 and I had to ask my spiritual director to explain to me how to pray as though I had never done it before. For weeks, all I did during my prayer time was cry. Cry and yell at the Lord and tell Him how confused and hurt I was and how I didn’t understand any of this and how I hated Him for abandoning me and not helping me stay and how I hated myself for walking away from the convent and from Him. So it was pretty tough … but by some grace of God, I was able to stick with it and it slowly got easier and less painful.

I’ve discovered since then that it’s normal to struggle with praying when you leave the convent. I’m pretty sure every woman I’ve talked to who’s been in that situation has mentioned not being able to pray, or not wanting to, or not knowing how to anymore.

But what to do about it?

Obviously, I’m a big fan of the holy hour every day plan – it has helped me to get to a place where my faith is stronger and more real than it ever has been before.

My director had encouraged me to follow this structure in my holy hour:

10 minutes of just sitting with the Lord, recognizing His presence and looking at Him – and letting Him look at me.

15-20 minutes of Lectio Divina or Ignatian meditation on the Gospel of the day, allowing the Lord to speak to me through Scripture.

15-20 minutes of spiritual reading or another devotion, like praying the Rosary or Divine Mercy chaplet.

Most of the time, I just prayed with the Gospel, or, if I felt that wasn’t fruitful, I picked up a book. I read parts of St. Faustina’s diary, all of Benedict XVI’s “Jesus of Nazareth”, a book called “Edith Stein and her Companions” (highly recommended, by the way – there are a number of people who were martyred with St. Edith Stein who had previously left religious life!) and a number of other books during the ten months I spent at home “recovering”.

Still, doing a daily holy hour isn’t the only way to pray, nor is it necessarily the best way for you right now. It really depends. It could be that you’re experiencing a lot of anxiety, so trying to sit in the chapel for an hour might not work well. Or perhaps you have a full-time job, and just don’t have an hour to spend in the chapel each day. The important thing is giving the Lord space and time to speak to you, whether that’s in the chapel or out on a walk or in a prayer space in your room or at the library or on your lunch break at work or wherever. Being able to hear His voice is vital for figuring out where He’s calling you now – if you aren’t listening to Him or giving Him space to talk to you, how can you know what His will is?

(For the answer, stay tuned for Part 2 this Saturday!)