Book review: The Mystery of Love for the Single: a guide for those who follow the single vocation in the world 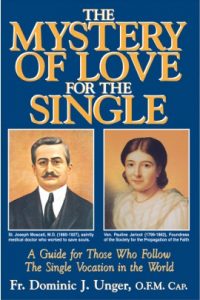 What?  A single vocation?  You may be thinking, “this book must be about the vocation of the consecrated virgin living in the world.”  This book definitely speaks to a woman seeking or already living that state in life, but does not limit itself to that particular vocation.

When I left religious life, I knew of three vocational options: religious life, marriage, or consecrated virginity.  Later I became aware of and inquired into that very hidden vocation of persons dedicated to God in secular institutes.  For various reasons, none of these vocations could be “it” for some of us LL followers. We remain “uncategorized,” even years after leaving religious life.

This book offers another way, for those who believe God invites them to it: that is, to choose perfect chastity for the sake of Christ as a single person in the world.  From this book, we see that any woman who desires to take Christ alone as Spouse need not be hindered from doing so by her inability to enter religious life or another of the more formal ways of consecrated life. The author presents, to anyone who desires to be His and is single in the world, the option of making a private vow or simple dedication of oneself in celibate love to the Lord. Written before the vocation of the consecrated virgin living in the world was re-instated in the Church, it also alludes to, first and foremost, this particular call, but does not limit itself to that call.  This is a message of hope for anyone out there who desires consecration but cannot enter religious life and, for whatever reason (and there can be reasons other than not being a virgin), cannot become a consecrated virgin.

I quote from the book, page 102: “This vocation…may be chosen even though one is forced to stay out of the other vocations…It should, in fact, be a vocation primarily for those normal and psychically sound people who deliberately choose it…[but also for] those who…are not eligible for the religious life…who could, however, choose the married state if they so desired” but who wish to be espoused only to Christ.

Fr. Unger also includes among those who could choose the state of perfect chastity in the world: widows, persons who were married but are now permanently separated, single moms, persons who would like to have gotten married but have not found a suitable companion, those who desired the religious life but could not enter, and penitents who have turned from a life of un-chastity and chosen to live their lives now in perfect continence for the love of Christ.  (pages 100, 105-108).

Fr. Unger says of this grace to choose and promise celibacy in the world, “God usually gives His grace and call by making a person fit to live this type of life and by inspiring the correct motives for choosing it, and, at times, by allowing circumstances that will hinder one from choosing any other vocation…The choice can still be free, even when circumstances conspire against choosing any other vocation.  If one would like to have married but must remain unmarried because of circumstances, or if one is prevented for various reasons from entering…religious life, one may…make the best of circumstances and freely consent to live in perfect chastity, since that is God’s will.” (page 100)

As for motives to live this way of life, on page 101 Fr. Unger writes, “One should have a well-balanced attitude toward life and toward the other vocations,” so as to point out that it cannot be chosen because one looks negatively at any of the other states in life.  He continues, “The highest motive…is the undivided love that one wishes to bestow on Christ” and he contrasts this to “a single person living in the world who might, for all that, be doing very much good, but who lives in the unmarried state very regretfully.” And he writes of a secondary “supernatural motive of charity toward fellow men, since it frees one for a wholehearted devotion to the service of the Church and humanity.”

The vow or dedication can be made privately, by way of “internal resolution and no further formality. One could also recite a special prayer of consecration, privately, either in one’s home or before an altar in Church.”  (page 59) I would also like to mention that in Volume One of An Introduction to the Vocation of Consecrated Virginity Lived in the World by the United States Association of Consecrated Virgins, Raymond Cardinal Burke is quoted on page 39 as mentioning that a woman may also offer a private vow before a bishop or priest in the context of Holy Mass.

On a personal note, I came across this book—I can’t even remember how—not long after I left religious life.  At that time, I was not at all attracted to staying in the world as a single person. I wanted to enter religious life again, and as much as I wanted a life of consecration, would have preferred marriage to consecration (so I thought) if I had to remain in the world! The thought of remaining single in the world repelled me.  So when I read it, I did so “at arms’ length”, and several miles distant from my heart.

Now here I am, years later, actually recommending it to my fellow Leonie’s Longing followers, because I have found so much hope and refreshment for myself in it!

I think that when a woman meets her husband, she doesn’t choose a way of life, but a person.  If that person happens to serve in the military, or politics, or becomes handicapped…he remains one’s husband.  Where, what environment, what lifestyle, even if it entails loneliness at times and other sufferings, is not of paramount importance.  To belong exclusively to the one you love, that is what matters.

For those trying to figure out your particular #vocation, this book can help you to prayerfully consider whether or not some form of #consecration in the world could be the way of Love Our Lord may beckon you to. Click To Tweet

For those of you out there still trying to figure out your particular vocation, this book can help you to prayerfully consider whether or not some form of consecration in the world—either as a consecrated virgin or by making a private vow or dedication—could be the way of Love Our Lord may beckon you to.  For those of you who already have chosen this route, I suspect you will find this book to be a source of great consolation and encouragement. So, read on! The Lord of Mercy has a plan of Love for each one of us. Alleluia!

The Mystery of Love for the Single: a guide for those who follow the single vocation in the world