I am the Resurrection and the Life

It was one year since I left the monastery. I knelt on the stone floor of the retreat center chapel, my Bible opened to the Gospel of John, chapter 11. The story of the raising of Lazarus.

It seemed fitting to spend some time with this moment in Jesus life for so many reasons. The friends of Lazarus begged Him to come when her friend was sick – to save Lazarus from death. Like them, I begged Jesus to come and make up for my frailty with His love and His peace – to give me the grace of perseverance in the vocation He called me to. And instead He waited. He waited as Lazarus died. He waited as I left the convent doors and no longer walked the cloisters of the monastery.

How similar to Mary and Martha I was when I told Jesus that “If You would have been there, I would not have had to leave.” How much I didn’t understand His ways, as He was in the midst of revealing to me that He is the resurrection and the life. And that in order for there to be the beauty of resurrection, there must come first the sorrow of death.

And it struck me. Perhaps it was not the death of Lazarus that caused tears to flow from the eyes of our Lord, but rather the reaction of Lazarus’ friends. When faced with sickness they begged Jesus to come. They begged Him to heal their friend who was ill. They had faith. But when sickness turned to death, they gave up. They placed Lazarus in the tomb. They believed the situation was beyond hope. They had Jesus, who is the Resurrection and the Life, in their midst, and they continued their mourning. They thought the story was over. And Jesus wept.

This left me to be determined to believe that, as difficult as things sometimes are during this time outside of the monastery, Jesus can create something beautiful out of it. It challenged me to have the faith that will trust in Him even in the face of death – the death of my identity as a sister. It challenged me to have the vulnerability to place this death before Jesus, and not seal it in a tomb. And it challenged me to believe in the Resurrection – not just two thousand years ago or at the parousia, but also here and now in the moments of my life. I do not know how the Resurrection will manifest itself in my particular story, but placed in the hands of Jesus I know it will be beautiful. 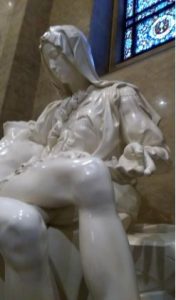 “And all through Lent we had this beautiful statue

to help us meditate on Mary and her faith.

And that faith in the face of failure.

In the face of death.

In the face of shattered dreams.

In the face of enthusiasm that had been spent

and hopes that had been dashed in a worldly messiah

that was going to come and liberate them from the Romans.

But Mary had a quiet faith

and she waited in expectation of the Resurrection.

It didn’t take away the pain of the moment.

But it gave her direction.”