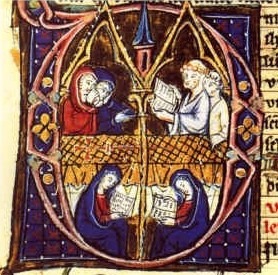 The first time I heard the word Beguine was in undergrad theology at the Lateran University in Rome. I was assisting our venerable professor of Church history with his microphone at the break between lessons. He asked me, “Chi siete?” in Italian “Who are you (both)” while motioning to my place in the classroom, and to my friend Sara who was sitting there chatting with the Roman seminarians—as one does during the break. I understood he was asking what community Sara and I belonged to, which was a normal enough question. In our class of 70-some students there were over 30 ecclesial entities represented. Another professor had once asked me the same question on the very first day of class, and I had answered that my community was the Holy Catholic Church. When he looked confused, I responded that I hoped it was his community as well. He was embarrassed as my classmates laughed. I amended my ways and learned to simply say, begrudgingly, “lay woman”, when it came time to announce allegiances at the start of each new course.

So I told the good Prof. Mario Sensi, “I am a laywoman with monastic tendencies”.

He gestured to Sara, “Both of you?”

I said, “Yes”. I explained, in brief, that we would have done something else, each been part of some group, but that discerning a community is complicated to do after undertaking studies. So, well, at least we try to pray the liturgy of the hours and live celibacy for the Kingdom. Prof. Sensi became very excited and gestured with his hands in the air “You’re Beguines! BEGUINES!” I assured him he was mistaken, and that I had never heard of that community. He smiled and said, “You will learn”. And, indeed, three years later when he taught his new course Mulieres in Ecclesia on Beguines, I was signed up for the adventure. Sara planned the field trip for our STL class to visit the houses of Beguines dating from the 13th to the 15th centuries in central Italy. But I would not yet identify with the Beguines.

Sara and I had met because a priest who was close to each of us had put us in contact and encouraged us to go to Rome to study theology. This priest had spoken to each of us about his plans to found a community; however, I had just recently departed from a new community that had canonical problems and I was wary of new things. At the same time, I had a conviction I should continue my path in the Church and had a deep desire to study theology. Sara had survived cancer and had decided she wanted to live life radically. She had already spent some time discerning whether or not to set out on the path towards consecrated life. We met up in Rome. The priest who connected us did not continue in his idea to found a community. This was well for us, because as we studied, a new community lost its appeal and the older forms of consecrated life seemed to grant deeper rootedness.

So, at the time Prof. Sensi was teaching his course on Beguines, Sara and I were networking with the Ordo Virginum (OCV) in Rome, an ancient ordo, or order, of women each consecrated by a bishop to live virginity for the Kingdom in relationship to the local Church. We were both attending the monthly meetings at the Roman Seminary, together with other women who had invited us, an event where both Consecrated Virgins and those who were interested in their ways of life met for formation sessions. For me, OCV was not entirely a good fit, first of all because I do not have a stable sense of calling to a particular diocese and also have a desire to continue in academia with all its uncertainties. However, there are many things I like about OCV: for example, its focus on living continence for the Kingdom as a charism in itself. I like the diversity of women in the ordo, the strong local identity and the lack of a complex relationship with a founder-figure—things I had also admired about the spirituality of the diocesan priests with whom I had studied.

Ordo Virginum, though it may resolve the question of one’s identity and way of belonging in the Church, does not resolve the physiological questions fundamental to human life, namely the need for food and shelter. Women generally do not receive a stipend for participation in sacraments to guarantee sustenance by prayer. And so, as the fundamental needs became more pressing, the idea of OCV became less immediate. 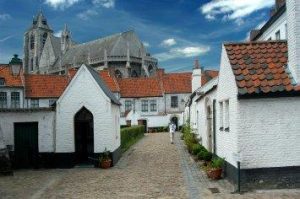 But, back to the Beguines. “Beguine” is the name given to a vast array of women who organized their lives and livelihood around the Church without (at first) any formal approval. It turns out the Beguines had first of all mastered a secular economic model for women to participate in ecclesial life while maintaining their independence, and this as early as the 12th century. If they shared a common life (and some did not), there was mutual support to live in continence for the Kingdom, but also freedom to leave the lifestyle at any time. Celibacy was an important requirement for being a Beguine, but permanent vows were not pronounced. This was not always celebrated and was even sometimes condemned by members of the hierarchy. In fact, if anything, the nominative “Beguine” was pejorative and even today is used by Italians to denote a professional Church Lady who doesn’t do much else, even though the Beguine movement has many saints associated with it.

For me the Beguines became closer as I took time to do a long retreat after I finished my STL. It was a good moment in life to stop and take stock of direction. I wrote down all the possibilities on a paper in a sort of flow chart of life options (this is not a specific Ignatian Retreat “task”, but my own way of working). I colored in yellow the way where I found some light. I found myself right where I was in academia, living celibacy for the Kingdom as I could, and happy to do so in free association with others on a similar path. In short, I found I was a Beguine and not really looking for another way to be.

I’ve written this little reflection “On becoming a Beguine” in dialog with Penny and Leonie’s Longing because of a shared vision we have that studying the Beguines can give consolation and a sense of identity to unmarried women who are living out their baptized and confirmed vocation while longing to feel more at home in the Church community. I hope Penny will not mind if I quote her as saying, “I think it will help a lot of women come to a new understanding of their place in the Church as laywomen living celibate lives for the Kingdom. Certainly, in my own life, I’ve drawn a lot of consolation from the ideals of the Beguines. It’s comforting to have a sense of belonging, of having a spiritual lineage, outside the formal monastic life.”

For me, acceptance of living in the identity of a Beguine has influenced my spiritual life by allowing me the freedom to do a few “experiments” in prayer. When a woman belongs to a well-defined spiritual tradition, her task is often to learn and grow in that community’s way of prayer without the freedom to try out different prayer styles. For many years the liturgy of the hours carried my prayer life, but now–although I love the liturgy as a way to pray with others–I’ve found my need for a more personal and meditative way of praying. I still look forward to praying the liturgy with others, but liturgy is certainly a different practice when one is alone for prayer.

I see this way of life as being a concrete living out of prophetic intuition. We understand the vocation of men to the priesthood as belonging to an “ordo”– the order of priests– which expands to include many different styles of sacerdotal lifestyle. By making an analogy, we could understand the women of every age who find themselves called to live intentional celibacy for the sake of the kingdom as part of a sort of “order of prophets” seeking with their lives to point to that love in Christ which surpasses death. The world, and sometimes even the Church, will not understand the witness of such women, but they understand each other. Psychologists tell us the sense of belonging to a group is one of our higher needs. Since grace builds on nature, we can talk about fulfilling a spiritual need to connect and identify with a group.

In my reflection on Beguines, I think it is important to recognize I am not alone. Sara is also studying what it means to be a Beguine. It is also important for us to recognize we are not the only ones seeking to root ourselves in this tradition. There are others out there already doing so. In the future, it could be good to think of a way to support each other. However, for the immediate present, I have to live out my calling to finish my doctoral dissertation in dogmatic theology at the Gregorian University. Then we will see where all this goes.

(Prof. Mario Sensi passed away May 25, 2015. His exhaustive study illuminating the role of mystic women in Church history continues to bring insight to many.)