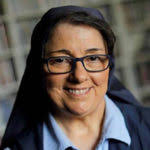 When I read Simcha Fisher’s article in America Magazine When a Catholic leaves seminary or religious life, I began to weep. I cried for all the young women who had entered my community and left, their choice or the community’s, over my 53 years as a Daughter of St. Paul.

I remembered when I was a postulant (1967) and a novice coming to the refectory (dining room) for breakfast and noticing that someone was missing. Gone without a good-bye, at that time never to be heard of again. It was so confusing that someone who was so much part of my group, or the upcoming groups, or even professed in temporary vows, could be gone. Just like that. If we said anything, the formator would shush us or glare at the person asking. One co-postulant told me later that it was thought if we talked about our missing companion that it might make the rest of us go, too. I was still in our high school aspirancy myself, but that lack of logic just further confused me (we discontinued our high school in 1991.)

Yet as I read through the article, tears flowing at the corner of my eyes, I recalled three times that I was asked to either drive someone to the airport, take another young sister home, or accompany someone in their discernment and then drop them off at her new residence after she decided to leave the community. I was part of the forgotten ones in this process of separation from a community that was no “gentle or conscious uncoupling” so to speak. I was one of the last members of the community a sister leaving might ever see. To me, this was the most heartbreaking thing I was ever asked to do in my years of religious life. It was traumatic for me. No one ever asked how it made me feel to be part of a person’s departure from this very intense and passionate way of life that we call religious life.

I recalled another sister who was often asked to take aspirants, postulants and novices to the airport, spirited out at dawn’s early light before anyone would miss them. It was during grand silence, too, so we were not to speak until after grace at breakfast if we did see suitcases by the elevator. I will call her Sister Mary. Sister Mary was chosen, I think, because of her gentle nature that would have a calming effect on the young woman leaving. I went with Sister Mary once to drive a sister in temporary vows to the airport as she was returning home. I waited in the car (the days when we could do so), but I was able to say good-bye and promise prayers before Sister Mary accompanied her inside the terminal. The hard thing was that I was told by the superior not to talk about the young woman’s departure to anyone.

The next time I was told, not asked, to drive a young sister home from one of our branch houses. Her family lived within driving distance. Sister Anna, an older sister, came along, too. The superior, who was very old school and stern, told Sister Anna and I that we were not even to get out of the car. Just let the sister off in front of her house, let her unload her suitcases, and drive off. I was told not to even talk to her. I was only in temporary vows, too, and had known this young woman since she entered though she was not in my group (or band, as some communities call our formation groups.) As soon as we pulled up in front of her house at about 7am, her family came out. Then Sr Anna surprised me. She hit my arm and said, “Say good-bye.” So, I did. I turned and gave the young woman a hug over the seat. Then Sr. Anna got out of the car, against orders, and accompanied the young woman to the front door, to her family. She stayed and spoke with the family for a bit, then came back to the car. We were both crying. Sr. Anna, one of my favorite nuns ever, told me through her tears, “You don’t need to say anything. Charity comes first.” And I never did until now.

I will not say too much about the third sister because we remain very good friends today.  But I know she suffered greatly as she discerned her way from religious life into a serene life “in the world” as we call it. I was the local superior when she was sent to the community for the purpose of discernment, at her request. As she met with a spiritual director, I was the community member she related to the most. It was a difficult separation for many reasons, and we both cried many times, not least of which was the day we went to buy her a new meager wardrobe at the mall and the final day I drove her to her new residential job after she was dispensed from her vows. This was like dying to her and to me, two different ways of dying. I had known her from before she entered and now, these many years later, I was there when she was leaving, following what she believed was God’s will for her. I did not disagree with her discernment, but her leaving was as if she was pulling off her skin to reveal a new identity that was still taking shape. It was so painful. She is one of the bravest people I know, and I love her for her courage, perseverance, and love for ministry that has never wavered.

I shared this blog post with Sister Mary and she commented:

I do regret in hindsight not having more of Sr. Anna’s wisdom of heart. Most of the time I drove very young ones to the airport or bus station. I was sent to be a kind presence and to assure that they made it to their gate safely. Some left singing and some left sorrowing, so as their last contact I had to keep things light and loving. As you say, we are in a better place now. The young ones are already women and the formation program is so much more mature, so we don’t have half the drama anymore. I always pray for those who are wavering even if I don’t know who they might be, and I send them on their way with love and blessings.

In one way I was a willing participant in the departures of these young women from religious life but in another way, I was unwilling because I knew that if I were suffering from a profound sadness, the young woman was probably suffering so much more. I have always tried to do everything asked of me, but some things were too hard and had to change, and thank God, they have.

What did I learn from these experiences? That charity comes first, always.

We do things differently now. If a young woman at any stage of religious life discerns to leave (or is invited to do so by the community), she may share this information with whomever she wishes – and we can stay in touch. She can say good-bye to the community in the dining room or make a more discreet departure – her choice. But the sister or young woman is encouraged to be more transparent about her discernment because the entire community is transitioning with her as she leaves. 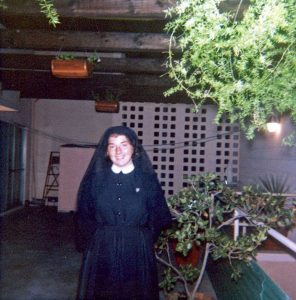 Sister Rose Pacatte in August 1967, at the San Diego convent of the Daughters of Saint Paul, the night before flying to Boston to enter the convent.

As we slowly moved from a pre-Vatican Council II way of doing things in our congregation in the U.S. to being, well, normal, we had a provincial who did something wonderful. This was in the later 1980s. I was on our provincial council then. She thought it would be a good idea to send a Christmas card and note to each sister (novice or postulant) for whom we had contact information, and let them know we remembered them, ask how they were doing, and that we continued to pray for them. This resulted in more open communication, visits to the novitiate, reconnecting with old friends, and oftentimes, healing.

I wish there had been Leonie’s Longing all those years ago so young women could receive counseling and referrals and moral support, and I am glad this organization exists now. God willing, I will celebrate my golden jubilee of profession in 2022 (and my 55th of entrance). If you are reading this, know that I remember everyone, and I wish you love, happiness and the peace of Christ. I hope you will forgive any suffering I may have caused or contributed to at a very difficult time of your life. I ask for your prayers.

The thing is, those who become part of our inner world, as we do in religious life, are never gone. We remain sisters in the heart of God – always.